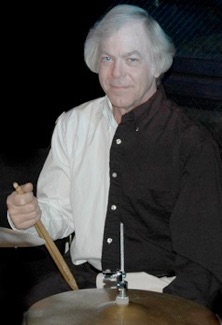 I was exposed to my mother’s music, early in life.

Every year when we were kids my mother would take us to New York City to see the Broadway Shows or the Rockettes.  We would vacation at Ocean City, New Jersey and go up from there.  We always spent one day at the steel pier in Atlantic City.  It was there that I met with Gene Krupa backstage after a show by the Gene Krupa Band; at the time my age was 15.

I have never gotten over the sound of a Broadway Musical or the Pit Orchestra.  It’s a unique sound, very vibrant and powerful and needs to be heard to be appreciated.

When I was playing for Cut The Mustard, I was using double bass drums.  What I really liked about the set-up was the location of the mounted toms, that is directly in front of me.

The design for the Off-Set Pedal came about because of the desire to get the mounted toms directly in front of me while still mounted on the center of the bass drum. The only way to do that was to have the bass drum directly in front of me.  So I set up the bass drum with mounted toms and placed the throne directly behind the center of the bass drum and sat down. BINGO!  On comes the light.  I needed a pedal on the right and a pedal on the left. I then purchased two relatively inexpensive double bass drum pedals from Musician Friend, tore them apart, hand-made the parts I needed from them, and fabricated the rest of the parts needed to build the first prototype.  Although very simplistic in form, the unit was sound enough to demonstrate the validity of the concept.

The pedal debuted at the 2003 summer NAMM Show.  The very first person to try it out was the orthopedic surgeon from Texas who raved about the ergonomics of the design relative to the drum positioning and body positioning.  “Better on the back, legs, hips, and arms. It’s like sitting down to dinner” were his exact words, and he is right!

He purchased a pedal from me the next month!

After three years and many mock-ups and models, we now have the third generation Professional Grade OFF-SET Double Bass Drum Pedal.

In January 2018 Mountain States Distributing LLC purchased the patent, brand, tradenames and assets from Charles Fisher.  We were intrigued by the product design, quality and uniqueness.  It is our goal to make Mr. Fisher's product and dream more widely accessible to drummers around the world, as it is superior to any other double pedal on the market.